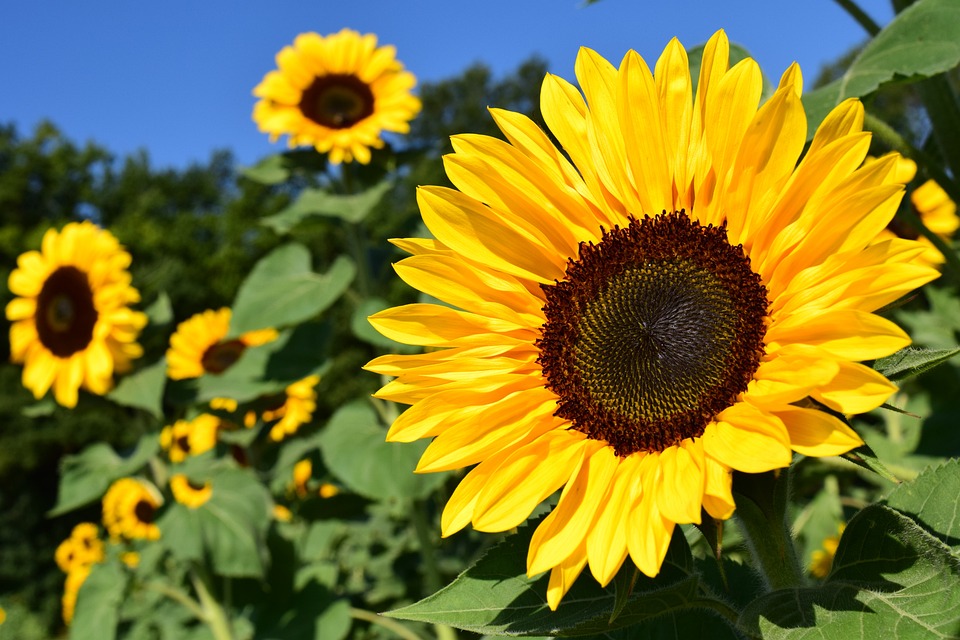 Where do sunflowers come from?

Sunflowers were first planted around 1,000 BC. on the American continent, in present-day Arizona and New Mexico. Their area of application was extremely diverse: At first, sunflowers were cultivated for food production. For example, people made flour for bread from the sunflower seeds. The kernels were also used as a small snack between meals or were mixed with other cereals or oat flakes to form a kind of muesli. Delicious!

But the sunflower was not only important as a source of food. When the Native Americans discovered that oil can be obtained from sunflower seeds, they used it for skin and hair care. Sunflower oil is full of healthy vitamins! Sunflower stalks were also a popular building material. A great flower, isn’t it?

When the Russian Orthodox Church banned foods containing oil and fat during Lent in the 18th century, the sunflower became very popular in Europe, Russia and Ukraine. Sunflower oil was excluded from the ban. No wonder a lot of importance was attached to the sunflower. By the early 1800s, Russian farmers had already grown over two million acres of sunflowers!

How did sunflowers get their name?

You can probably already guess where sunflowers got their name from. The flowers always stretch their heads towards the sun. They love to bask in the sun and can’t get enough vitamin D. However, there is another explanation: The botanical name Helianthus is made up of the ancient Greek words helios (= sun) and anthus (= flower).

Speaking of Greek: In Greek mythology there is a story about the nymph Clytia who fell in love with the sun god Apollo. At first he was in love too, but then he left Klytia for Princess Leucothoe. Mad with jealousy, Clytia told the princess’s father about her relationship with Apollo. As punishment, the father buried his daughter alive.

Clytia’s plan didn’t work: Apollon, enraged and distraught, turned her into a sunflower. But their love was so strong that every day she followed Apollo as he walked across the sky, stretching her head towards the ball of the sun.

The sunflower and its meaning?

Inspired by the Greek tale of Apollo and Clytia, sunflowers symbolize loyalty and admiration. And because of their connection to the sun, sunflowers are considered a happy flower. For example, if you want to cheer up a dear friend, you send her exactly the right message with a bouquet of sunflowers like our Nikita!

Depending on the culture, however, sunflowers can change their meaning. In China, sunflowers stand for long life, vitality and happiness. For the Native Americans, the sunflower was a symbol of harvest and supplies. No matter where you look: Many cultures associate something positive with the sunflower – because it simply makes you happy.

The Spiritual Significance of the Sunflower

For many people, sunflowers have a spiritual meaning. On the one hand, this is because they look similar to the sun, but they are always looking for the light. Sunflowers therefore play a role in many religions. They are symbolic of loyalty and willingness to follow God or another deity.

Sunflowers are also good for the body and soul: A bouquet of cheerful sunflowers like Soleil can help to overcome stress, anxiety and depressive moods. Some people also swear by sunflower-based tea, bath bombs and oils, massage oils, and frying oils. A real all-round talent for self-care at home.

Do different colored sunflowers have a different meaning?

When you think of sunflowers, you probably picture their large yellow flowers and brown clusters. But did you know that there are also sunflowers with other colors? They are rather rare and each have their own meaning.

– Yellow sunflowers are the classic and popular everywhere. The bright yellow flowers stand for the good, the truth and timelessness.

– Red sunflowers usually have dark red flowers and a black flower head. They are really unusual, but also unusually beautiful! They also signify strength and positivity.

– Orange sunflowers are very vibrant flowers that are magical to bees and hummingbirds. No wonder they stand for energy, joy and happiness.

– White sunflowers are probably the rarest sunflowers. They are not really white but rather pale yellow with a black flower head. These sunflowers signify purity, rebirth and peace – perfect if you want to give a friend

flowers for her new home

after her breakup, for example .

– Pink sunflowers are unusual but really beautiful. The rather dark flowers become lighter and lighter towards the tip and stand for innocence and health.

Purple sunflowers are perfect when you want to brighten up your garden with a very special flower. It represents wealth, fame and royalty – a truly impressive flower!

You can’t get enough of sunflowers like us? Here are some interesting facts!

Are your sunflowers not looking quite as fresh? You can dry them and decorate your home with a colorful bouquet of dried flowers like Aiko!